LED and traditional rotary- and touch dimmers for application in standard flush-mounting boxes according DIN 49073 with an aperture of 60 mm.

Rotary dimmers for the Swiss market. Either with or without Swiss mounting frame.

We are your specialist for individual dimming solutions. If you do not find the product that perfectly fits your needs in our standard portfolio, maybe the modification of just one or two characteristics makes the perfect solution for you. On request, we can send you an offer for the development and production of customized dimmers and will be your partner for dimming solutions from a single source.
For more than 40 years now we have been working together with numerous companies all over Germany and Europe and face new interesting challenges every day.
In the last couple of years we have successfully completed various projects, for example the development of constantly good LED dimmers and radio transmitted dimmers.

Get in touch with us and describe your requirements and specifications.
We are sure of it: we can make (almost) everything happen.

Should I rather use a leading or trailing edge dimmer?

The classical dimming principles are leading and trailing edge. Depending on which kind of light source needs to be dimmed, the one or the other dimming principle is best used. In general, the leading edge principle is more common. The current flow is controlled by a triac and is being switched on retarded after the zero crossing of the alternating voltage (white triangle in figure 1). Then the current continues to flow to the next zero crossing, and is being “cut” again. This is how the desired dimming performance is being achieved and the brightness of the lamp being regulated. 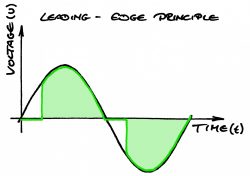 The trailing edge principle works the opposite way. In zero crossing, the current is being switched on directly and being “cut” in the further process of the sine wave. 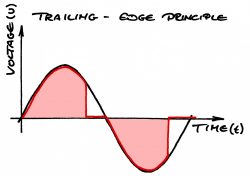 In general, LEDs can be dimmed with both principles. The electronic inside the LED is a main factor of a good dimming performance and also how well the dimmer can handle this electronic. For many LEDs the trailing edge principle has proven itself to be the better opportunity. Especially LEDs working with drivers seem to better be handled with the trailing edge dimmer. Unfortunately, most of the times one needs to test the combination of dimmer and LED personally.

What dimmer fits to my LED?

One replaces the conventional bulb or halogen lamp with a LED and suddenly the dimming doesn’t work anymore. This experience is made by many and they ask themselves: Which dimmer should be used for LEDs?

First, one needs to check whether the LED is dimmable, which is being displayed by the following (or similar) symbol:

A 230V LED can either be dimmed with the leading or trailing edge principle. Also check the packaging of the LED, it might have a recommendation printed on it. LEDs or LED stripes working with 12V or 24V need to be controlled by a PWM (pulse width modulation) dimmer.

Which LED needs to be used for my dimmer?

If you already have an LED Dimmer in use and don’t know, which LED to buy, you can use our LED recommendation list. It shows, which of the 400 tested LEDs work best with our dimmers. When buying a LED, make sure it’s a 230V LED and that it is dimmable. 12V or 24V LEDs can only be dimmed with our dimmers when using electronic ballast.

What do I do when my LED is buzzing or flickering?

There are various reasons for LEDs to buzz, flicker, blink or hum. Usually these effects don’t necessarily have negative impacts on the operation, the lifetime or functionality of the LED. But these effects are unwanted negative side effects and may even annoy the user. A blanket statement about the connection between the price of the LED and the side effects can’t be made, meaning, not only inexpensive LEDs may have these side effects. Mostly, multiple factors lead to these consequences.

First you need to make sure you have a dimmable LED. This is the first condition for a good dimming performance. A dimmable LED is marked with the following or a similar symbol:

But even if all these requirements are fulfilled, this doesn’t guarantee a good dimming performance. The combination of LED and dimmer needs to work, too, as not only the dimmer but the LED as well has an integrated electronic and if these two do not harmonise, it can also cause negative effects.

Sometimes though you can only test different combinations of LEDs and dimmers personally to find the best combination. You can use our LED recommendation list to help you find the perfect LED among 400 tested ones.

What are the advantages of a Universal LED dimmer?

The Ehmann LED Universal dimmer in particular has one more advantage, for example a 3 wire connection that can be used optionally to increase the dimming performance. To use this feature, the neutral conductor (N) needs to be connected to the dimmer. If it is integrated in the house wiring, the dimmer recognizes it automatically and uses the natural zero crossing as a factor to improve the leading or trailing edge operation.

Which switch range / covers can be used with the dimmer?

EHMANN dimmers can be integrated in switch ranges from GIRA and Berker without any adjustments. For switch ranges produced by BuschJaeger and Jung, you need to use our adapter, which is added to every one of our dimmers. This is how you have the most flexibility. 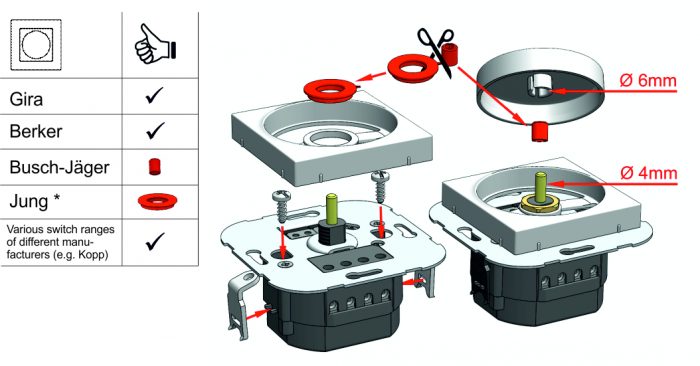 Furthermore, our Swiss dimmers (round support plate) are compatible with various switch ranges as well. They can easily be integrated into switch ranges by Feller and Hager. 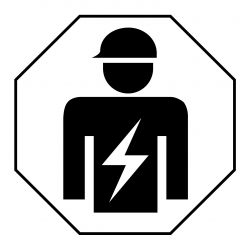 Safety note: Only trained electricians should perform work on 230V networks, taking into account valid regulations (e.g. DIN VDE). The voltage must be turned off before performing work. Non-observance of the installation instructions can lead to damages of the product, fire or other dangers.